Millions of women experience vaginal bleeding after sex or instances of spotting between periods. In this article you will learn some common reasons, as well as, rare cases.

Although it may be startling to see blood on your undergarment unexpectedly, in the vast majority of cases there is no need for alarm. However, do not procrastinate. Postponing a visit with your gynecologist or primary care physician is never a good idea.

You probably searched for your symptoms online and found that it can be particularly frustrating to find a satisfying answer.

The truth is, without an examination to identify the underlying cause of your bleeding by your gynecologist, all you can do is guess. 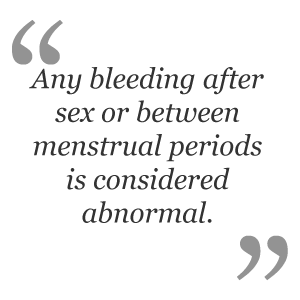 Don’t automatically jump to a worst case scenario. Very often the cause is something easily remedied. However, minor vaginal spotting can become serious if left unchecked.

It is understandable to be worried about vaginal bleeding, not knowing the underlying cause can be nerve-wracking, terrifying and stressful in the extreme; so schedule an appointment with your gynecologist right away.

You may discover a few drops of blood after sex, but that is not the only reason you may experience bleeding. Any bleeding after sex or between menstrual periods is considered abnormal bleeding and is sufficient cause to schedule an appointment with your gynecologist.

Listed below are common causes of vaginal bleeding. These may occur due to:

An STD is a common cause, particularly if you’ve had an unprotected sexual encounter. Some STDs don’t demonstrate immediate symptoms and can lie dormant within the body to surface at a later date.

Whether or not you have vaginal bleeding as a result of an STD is dependent upon the individual. Not everyone experiences unexplained vaginal bleeding due to an STD. It’s important that you be checked as some STDs can lead to infertility if they’re not treated.

PID typically occurs if you’ve had a long-term STD that’s gone undetected and bleeding may occur during or after sex. It’s important to note that in some instances, PID can be caused by other types of infections that aren’t sexually transmitted. A PID is often accompanied by some degree of pelvic pain, discharge and urinary problems.

Vaginal dryness is a common concern due to decreased estrogen levels, especially if you are of menopausal age. The change in estrogen levels can result in less production of the body’s natural lubricant in preparation for sex. Dr. Cook uses ThermiVA to stimulate collagen production in the vaginal canal which then restores your ability to produce more lubrication.

It’s estimated that up to 20 percent of women experience a very small amount of bleeding or spotting at some point within the first 12 weeks of pregnancy as a fertilized egg implants itself in the uterus. Let your obstetrician know about it to ensure proper care.

An especially enthusiastic sexual encounter can result in more friction than normal that has the potential to cause a small amount of bleeding. The same is true with a position to which you’re not accustomed or sex with a partner that has piercings.

This is a condition in which the cells inside the cervix can be exposed externally. The tissue is very delicate, sensitive and easily irritated. It’s more common among women who take oral contraceptives. It usually heals on its own by changing or stopping oral contraception and it can also be treated with cauterization when indicated.

While extremely rare, some women can develop a case of vaginal thrush, a form of fungal yeast infection. It’s easily treated through oral tablets, pessaries inserted in the vagina, or creams that can be applied to the skin around the opening of the vagina if needed.

If you haven’t had sex for several months, or even years, the vaginal muscles may take some time to stretch and resume their former elasticity. With inactivity, the vaginal lining begins to thin and may not produce sufficient lubrication, both of which may cause spotting.

After childbirth, the vaginal canal needs time to heal and resuming sex too soon after you’ve had a child can result in bleeding. Complicating the situation is the possible presence of an episiotomy and sex can rip stitches or staples.

Not everyone has vaginal bleeding after having sex for the first time and a lack of blood is no indication at all as to sexual experience. Some women do bleed after their first sexual encounter and others don’t.

Cervical or endometrial polyps are harmless, non-cancerous fleshy growths in the lining of the cervix or womb. They can be irritated during sex and bleeding can occur. Talk to your gynecologist to check if they can be removed.

An ovarian cyst typically doesn’t cause a problem unless it becomes large, in which case it can twist, rupture or bleed and may need to be removed.

Prolonged periods of high stress are detrimental to the mind as well as the body and it can present as intermittent spotting.

A hormone imbalance can affect anyone at any age. It’s most common, however, during menopause. Changes in Estrogen level can cause a myriad of symptoms which can be alleviated with hormone replacement therapy. Contraceptives can also cause spotting or small amounts of bleeding.

The condition is one in which there’s a change in the cells around the opening of the cervix or the cervix surface. It can result from chronic infections, increase in estrogen levels, an unusual pH balance or trauma to the area.

Bleeding during or after sex may be due to cancer and while it can possibly be a symptom, it’s generally unlikely. To be absolutely sure, a visit with your gynecologist is in order and make sure you get your annual Pap Smear to ensure early detection.

He/she may test for STDs, perform a pregnancy test, cervical screening, or a pelvic ultrasound. Your gynecologist has the necessary experience to identify the cause and outline your options for healing and health.

Dr. Cook is a gynecologist in Smyrna, GA and specializes in Women Wellness including treatment for a wide range of vaginal issues. If you find yourself in need of a caring and experience gynecologist, feel free to call her office at (770) 431-2322 to schedule an appointment or request an appointment online.

You have Successfully Subscribed!